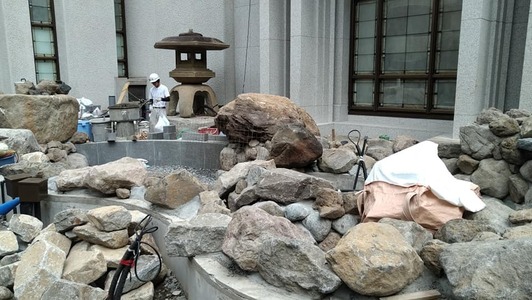 New landscaping along the southwest side of the Tokyo Japan Temple is incorporating the elements of a traditional Japanese garden including an irregular-shaped pond that could potentially be suitable for koi fish, carefully placed rocks to capture the essence of nature, a traditional pagoda-style stone lantern, and trees and flowers yet to be planted—all surrounded by a garden fence. Along the northeast side of the annex, numerous trees have been planted at street level. 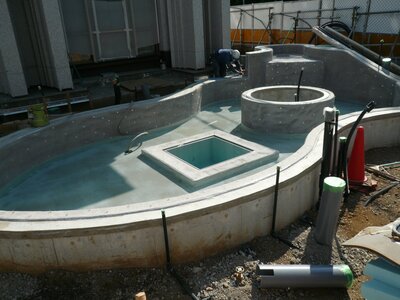 A large attractive water feature has been installed on the grounds of the Tokyo Japan Temple. The curved concrete will be clad in stone and/or tile that complements the exterior of the building. It features a waterfall on one end and what appears to be a spray ring or spray nozzle in the circular component. Renovation of the temple and construction of the new annex are anticipated to be completed early next year. 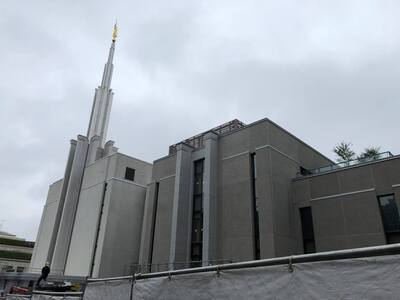 Renovation continues on the Tokyo Japan Temple in the 50th anniversary year of the organization of the Tokyo Japan Stake. It was the first stake in Asia, established on March 15, 1970. Five years later, President Spencer W. Kimball announced plans for the Tokyo Japan Temple at an area conference held on August 9, 1975. Once the prophet's words were spoken by the interpreter, the congregation broke into spontaneous applause. They lifted their hands high in support of the proposal and wiped away tears of gratitude. 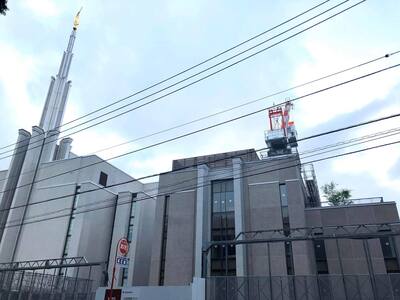 The removal of scaffolding and debris netting from the annex building next to the Tokyo Japan Temple has revealed the recently clad exterior of the structure. The multipurpose facility bears some architectural similarities to the temple including the columns that flank the main windows. Trees are also being planted atop the roof, similar to the Conference Center in Salt Lake City. Construction at the temple complex is expected to be completed later this year with a public open house held next year. President Hideki Aoki and his wife, Setsuko, have been re-called to serve as temple president and matron. 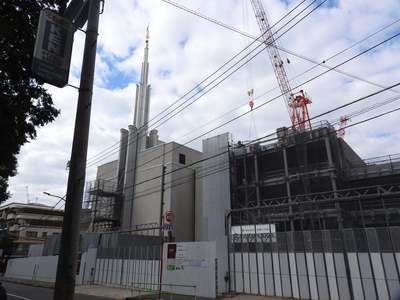 The primary focus at the Tokyo Japan Temple complex is the work of enclosing and completing the new multistory annex. The hulking frame of the building stands directly northeast of the temple and is being clad in stone that coordinates with the temple. The beautiful side-by-side buildings will serve as a center of worship for the Saints throughout the Tokyo region. 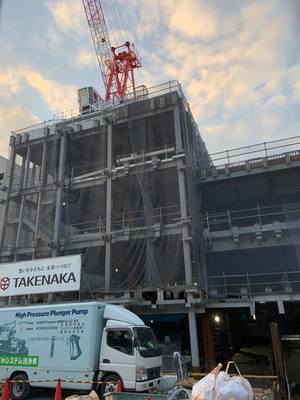 Stretching the entire block from southeast to northwest, the multi-level annex building under construction next to the Tokyo Japan Temple will be a massive upgrade to the former annex built in 1986. With the exception of the Chinese embassy, the Church now owns the entire block where the temple stands, having acquired properties and added supporting facilities over the past four decades. The temple was originally designed to be constructed on the narrow site of the former mission home. However, through a miraculous set of circumstances, property was acquired on either side, allowing for a more substantial and functional temple including small adjoining annexes for temple workers and patrons. 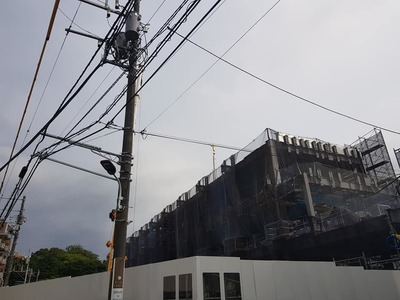 Renovation activities continue at the nearly 40-year-old Tokyo Japan Temple including the construction of a new multipurpose annex over the location of the previous white brick building. The new facility is designed in a similar style to the temple including the exterior paneling and long slender windows. It will rise to the same height of the temple as a companion building. The former surface parking and parking garage have been replaced by an underground parking facility. The temple grounds will have a more open feel with the removal of the wrought-iron perimeter fence. 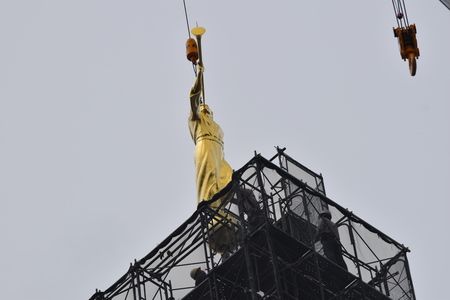 Numerous members in Tokyo gathered to the Tokyo Japan Temple yesterday to witness the installation of the angel Moroni statue atop the spire. The temple closed approximately 18 months ago for an extensive renovation project. Members look forward to the reopening of the temple and to participating regularly in temple ordinances. 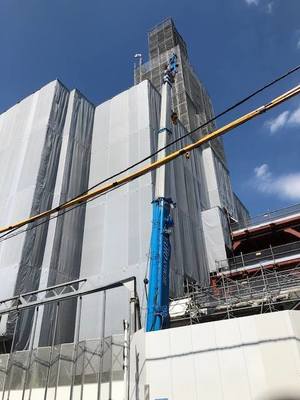 Renovation work at the Tokyo Japan Temple has progressed to the temple exterior, which is covered from top to bottom in debris netting. Alterations are expected to the exterior appearance of the building, which may include replacing the precast stone panels.

Renovations Announced for Four Temples in Japan, the United States, and Paraguay

The First Presidency has announced that four temples will close later this year for extensive renovation projects. In October 2017, the Tokyo Japan Temple, Oklahoma City Oklahoma Temple, and Memphis Tennessee Temple will close. The Asunci n Paraguay Temple will follow in November 2017. The Tokyo temple is expected to reopen in 2020 and the rest in 2019. Closures have also been announced for Washington D.C. and Oakland.

Tokyo Temple and All Missionaries Ok After Quake

Shock waves felt in Tokyo from the Sendai quake caused Moroni to swivel, but the temple appears to have sustained no structural damage. All missionaries in Japan are safe and accounted for.

"The temple is a point of intersection between heaven and earth. In this sacred place, holy work will be performed through selfless service and love. The temple reminds me of all that is good and beautiful in the world.﻿"
—David A. Bednar