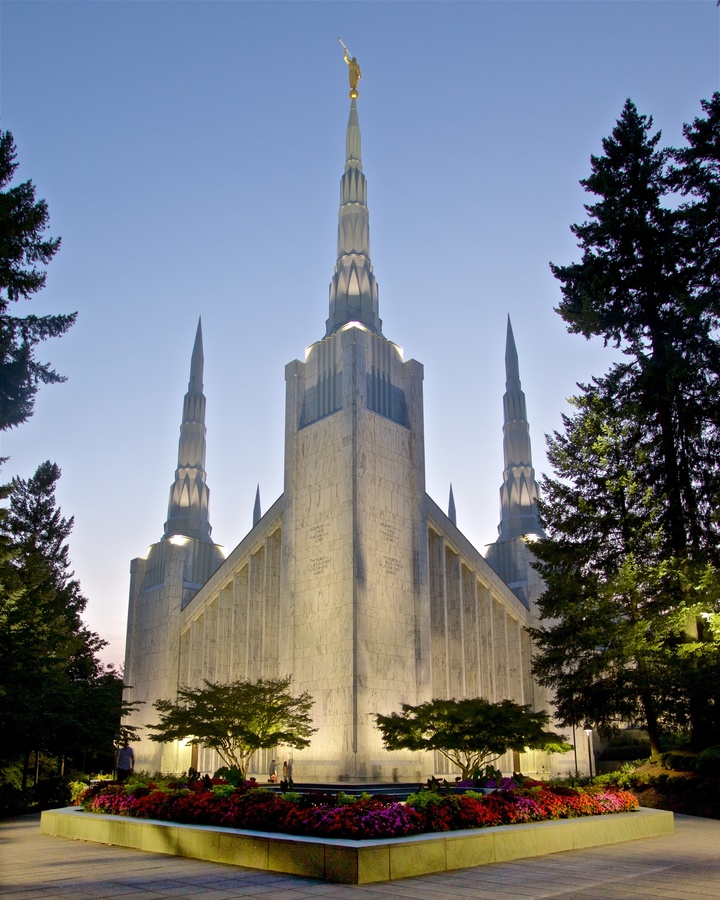 Rising elegantly among towering Douglas-fir trees, the six spires of the marble-clad Portland Oregon Temple create a beautiful sight for motorists traveling Oregon's I-5, situated about 8 miles south of downtown Portland in Lake Oswego. On the east side of the temple is a serene reflection pool sitting at the base of the main spire. A fountain on the west side replenishes an infinity pool. Visitors are welcome to walk among the gorgeous gardens that decorate the temple grounds and to obtain additional information at the public visitors' center that features films, displays, multimedia presentations, and a stunning reproduction of Thorvaldsen's Christus statue.

The Portland Oregon Temple was the first temple built in Oregon.

The Portland Oregon Temple sits on land originally purchased in the 1960s for a Church junior college. Later, when the decision was reversed, 7.3 acres were retained for the temple.

The Portland Oregon Temple was constructed directly on the Willamette Meridian, which is the principle north-south meridian for all land surveys conducted in the states of Oregon and Washington.

On the top floor of the Portland Oregon Temple are a collection of sealing rooms with white marble altars and a large assembly hall.

The floor plan created for the Portland Oregon Temple was adapted and used for the Las Vegas Nevada Temple.

On May 11, 1988, the gold-leafed statue of the angel Moroni was set into place atop the 170-foot eastern spire to an audience of television cameras, newspaper photographers, and beaming Church members.

A whopping 314,232 visitors toured the Portland Oregon Temple during its public open house. At the time, it was the fifth highest number of temple open house visitors in Church history.

President Ezra Taft Benson presided and offered remarks at the first three dedicatory sessions of the Portland Oregon Temple, though he extended the responsibility of offering the dedicatory prayer to his first counselor, Gordon B. Hinckley.

In 1994, the Portland Oregon Temple was awarded first place by the Royal Rosarians of Portland, Oregon, in the category of commercial rose plantings. Portland is known as the "City of Roses."

On February 25, 2012, the Portland Oregon Temple Visitors' Center opened its doors to the public. On June 9, 2013, it was formally dedicated by Bishop Gary E. Stevenson. The visitors' center is located next to the temple in a building that originally housed Distribution Services. When Distribution Services was relocated by a Deseret Book, a short distance away, it was decided that the building would be converted to a visitors' center.

"Behold, I will send my messenger, and he shall prepare the way before me: and the Lord, whom ye seek, shall suddenly come to his temple, even the messenger of the covenant, whom ye delight in: behold, he shall come, saith the Lord of hosts."
—Malachi 3:1