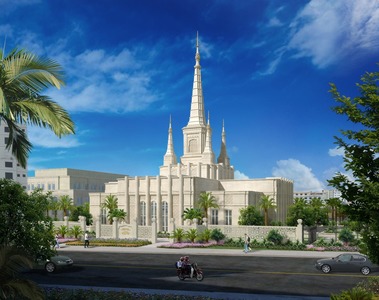 "Isn’t it beautiful?" said President Russell M. Nelson to a gathering of Church members in Phnom Penh's Premier Centre Sen Sok on Tuesday night as he unveiled the official rendering of the Phnom Penh Cambodia Temple on a large screen in the auditorium. "I don’t know when the temple will be completed," he continued. "But I do know that, difficult as it is to construct a temple, it’s even more difficult to build a people ready for the temple. Preparation for the temple includes members of your family. Your preparation will bless them, too." The temple will be located on Russian Confederation Street, between the Cambodia Institute of Technology and the Institute of Foreign Languages near the Royal University of Phnom Penh.