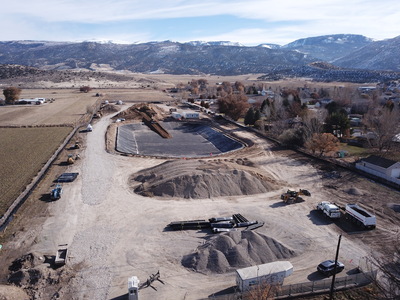 A tidy, tarp-lined excavation pit has been created for the foundation of the Ephraim Utah Temple. A sloping dirt ramp connects the dirt mound to the east with the excavation area, providing access for heavy machinery. The temple site is seen here from 400 East, looking east toward the mountains. The temple will stand near the campus of Snow College, which was named after Lorenzo Snow—the fifth president of The Church of Jesus Christ of Latter-day Saints. 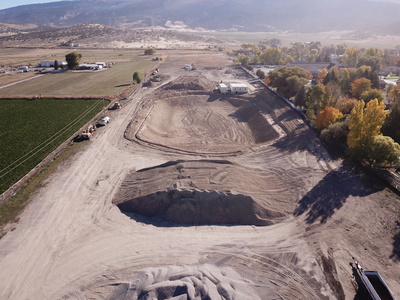 Excavators have created a large depression for the foundation of the Ephraim Utah Temple as seen from the street that runs in front of the site. The temple will be set back from the street, closer to the meetinghouse that sits on 100 North. The main parking area will be behind the temple, next to the meetinghouse parking. The front portion of the property will be landscaped as formal grounds, providing wonderful picture-taking opportunities. 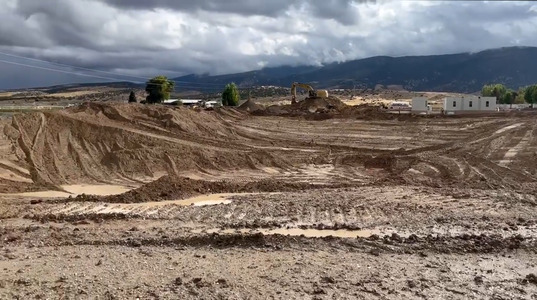 Earth-moving equipment is excavating and grading the site for the future Ephraim Utah Temple. The sloped property will be terraced to create flat platforms for the temple, parking, and formal grounds. The groundbreaking ceremony was held five weeks ago on Saturday, August 27. Church President Russell M. Nelson surprised the gathered crowd by presiding and speaking at the services, which had not been announced beforehand. 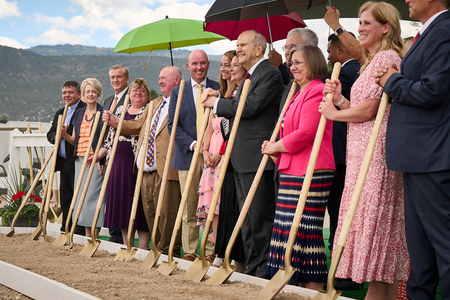 President Russell M. Nelson, whose family helped settle the Sanpete Valley in 1849, presided at the groundbreaking ceremony for the Ephraim Utah Temple on Saturday, August 27, 2022. Explaining his connection to the area, he said: "My dear mother was born in Ephraim, not far from this very temple site. My father was born in Manti. Three of my four grandparents were born here in Ephraim. All eight of my great-grandparents lived in Ephraim." In his site dedicatory prayer, he prayed, "We are deeply grateful for our ancestors. They have laid a foundation of faith that undergirds our spiritual strength. May we learn who they are, find their qualifying information, and bless their lives with sacred rites offered vicariously in this holy house." 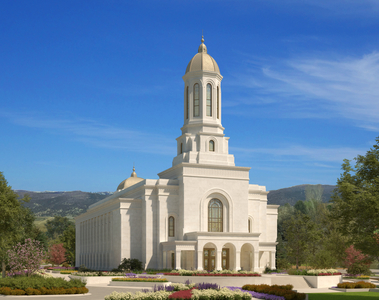 Elder Walter F. Gonzalez of the Quorum of the Seventy will preside at the groundbreaking ceremony for the Ephraim Utah Temple on Saturday, August 27, 2022. The 39,000-square-foot temple will be constructed on a 9.16-acre site at the corner of 200 North and 400 East in Ephraim. Plans for the temple were announced by President Russell M. Nelson (via video) at a press conference held inside the Manti Tabernacle on May 1, 2021.

The public received its first look at the design for the Ephraim Utah Temple on Friday, March 4, 2022. The official exterior rendering was released for the two-story temple of approximately 39,000 square feet that will be constructed at the intersection of 200 North and 400 East. The classically proportioned temple features two historic-looking domes, ornate stained glass, arched windows, and a beautiful arched portico. 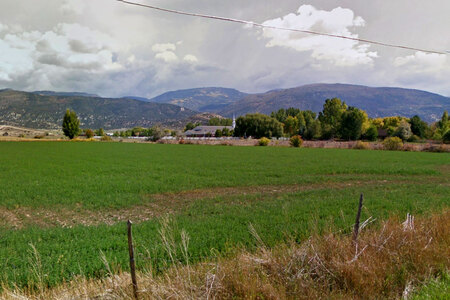 The location of the Ephraim Utah Temple, announced by President Russell M. Nelson in May 2021, has been announced. The temple will be constructed on a 9.16-acre site at the intersection of 200 North and 400 East. The two-story temple will be approximately 39,000 square feet. As more detailed plans for the temple are developed, project leaders will work with city officials on preliminary approvals and renderings will be released. No groundbreaking date has been set. 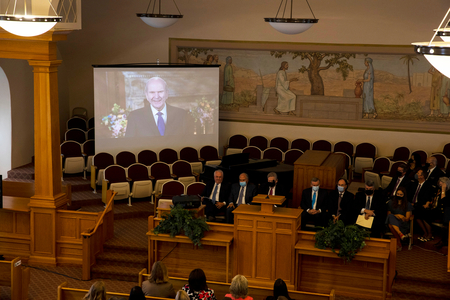 President Russell M. Nelson announced the construction of the Ephraim Utah Temple in a prerecorded message played at a press conference held inside the Manti Tabernacle on Saturday, May 1. Elder Kevin R. Duncan, Executive Director of the Temple Department, provided additional details. He said the temple will be similar in size to the Brigham City Utah Temple, which is approximately 36,000 square feet. The temple in Ephraim will serve some 30,000 Latter-day Saints and have four 30-seat endowment rooms, three sealing rooms, and one baptismal font. Endowment sessions will be offered every half hour. Bishop W. Christopher Waddell of the Presiding Bishopric said the site and design of the temple will be released later and that construction will take two years once the design and permitting process has concluded. "Every new temple built upon the earth brings with it an increase of Christlike service, goodness and love of God and of neighbor," said Elder Duncan. "We are especially thrilled that, similar to students who attend other colleges and universities, students who attend Snow College will now have an easily accessible temple in which to serve and worship."