Building the substructure for the temple and ancillary building; construction estimated to be completed in mid- to late 2025 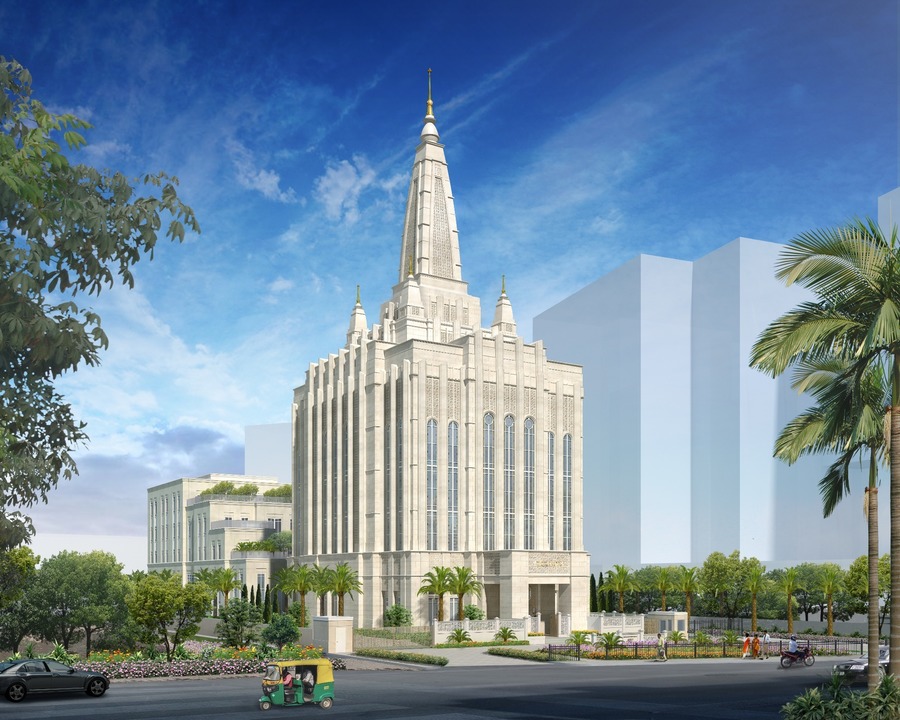 On December 2, 2020, Elder Robert K. William, an Area Seventy, presided at the groundbreaking ceremony for the Bengaluru India Temple. "This day would not have been possible were it not for your diligence and prayers," said Elder William. He added, "With the beginning of the construction and the future dedication of the House of the Lord, this will become a hinge point for India and India will not be the same anymore." The nearly 40,000-square-foot temple will be constructed on a 1.62-acre site at 2-B Whitefield Main Road, Garudachar Palya, Mahadevapura, Bengaluru. A two-level meetinghouse, administrative offices, a distribution center, and a patron housing facility will also be built on the site. 1

On January 15, 2020, an official exterior rendering of the Bengaluru India Temple was released to the public, featuring a 38,670-square-foot temple with a skyscraping central spire surrounded by four smaller spires. Behind the temple, a multipurpose Church facility will be constructed housing a two-level meetinghouse, administrative offices, a distribution center, and a patron housing facility.

The Bengaluru India Temple will be constructed on a four-lane road in the Whitefield neighborhood of Bengaluru on the site of the existing India Service Centre (Church office building) and stake center for the Bengaluru India Stake.

At the closing session of the 188th Annual General Conference, President Russell M. Nelson announced plans for seven new temples including the first temple to be constructed in the nation of India. Less then three weeks later, President Nelson stood before a large congregation of Church members in Bengaluru, India, as the fifth stop on his global ministry tour. He said: "Our plans were to announce six new temples at conference time. The Lord told me on the eve of conference: 'Announce a temple in India.'" He emphasized, "That was the Lord's doing." Accompanied by Elder Jeffrey R. Holland of the Quorum of the Twelve Apostles, President Nelson toured possible locations for the temple during his time in India.2

Although the first Church missionaries to India arrived in 1851, the first Indian mission—headquartered in Bengaluru—was not organized until 1993. Almost twenty years later, the first stake in India was organized in the city of Hyderabad on May 27, 2012, by President Dallin H. Oaks. There are now approximately 13,500 members in the densely populated nation of India, home to a staggering 1.3 billion people.3 Members are organized into four stakes and three districts.

The Bengaluru India Temple will be the first temple built in India.

"For thou hadst cast me into the deep, in the midst of the seas….Then I said, I am cast out of thy sight; yet I will look again toward thy holy temple. "
—Jonah 2:3–4