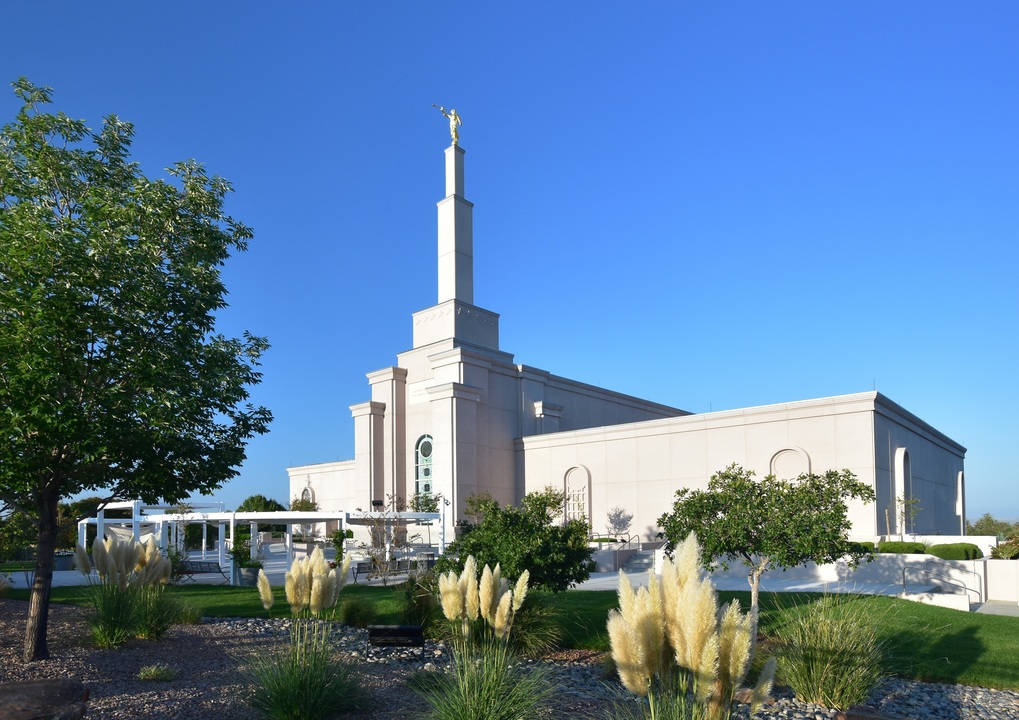 Like a blossom in the desert, the beautiful Albuquerque New Mexico Temple adorns the arid landscape of northeastern Albuquerque in the residential neighborhood of North Albuquerque Acres. The temple grounds are an oasis of green grass and vibrantly colored flora including many native plant species. At the main entrance, a magnificent spraying water feature delights patrons as they enter and leave the sacred structure. The exterior is prominently ornamented with heavenly symbols including moons, stars, and suns, which appear in their astronomical order from the earth. Another sun is featured in the Celestial Room art glass, featured prominently on the east side of the temple.

The Albuquerque New Mexico Temple was the first temple built in the state of New Mexico.

Missionary work in New Mexico began among the Zuni Indians on the Little Colorado River in the 1860s. More than 100 converts were baptized.

When problems were encountered in obtaining approval from the City for the temple plans, youth members in the area fasted and prayed for a resolution. Once approval was granted, they fasted and prayed again—this time for the construction workers.

At the groundbreaking ceremony for the Albuquerque New Mexico Temple, more than 6,500 members crowded on the 10-acre site to participate in the services. Elder Lynn A. Mickelsen of the Seventy and president of the North America Southwest Area presided. He commended the many members who had traveled long distances to witness the groundbreaking event. "It is during these special moments that we can feel and see the hand of the Lord moving in the work," he said. "It manifests a pattern of faith for your children, and they will make the same commitments to consecrate their lives to that which is good, honorable, and right."1

The Albuquerque New Mexico Temple was dedicated in four sessions by President Gordon B. Hinckley on Sunday, March 5, 2000. He asked that the Lord that the temple "be a sanctuary of peace, a refuge from the noise of the world. May it be a house of quiet contemplation concerning the eternal nature of life and of Thy divine plan for Thy sons and daughters as they walk the road of immortality and eternal life."

The original entrance doors of the Albuquerque New Mexico Temple were hinged doors that were opened by hand. However, because of the near-constant mountain winds that made closing the doors difficult, they were replaced with glass sliding doors. In October 2019, the former kitchen and cafeteria area on the ground level was renovated into additional office space.

"[The temple] is where we climb high above the smoke and the fog of these earthly things and we learn to read by God's eternal stars a course that will lead us safely back home."
—Harold B. Lee