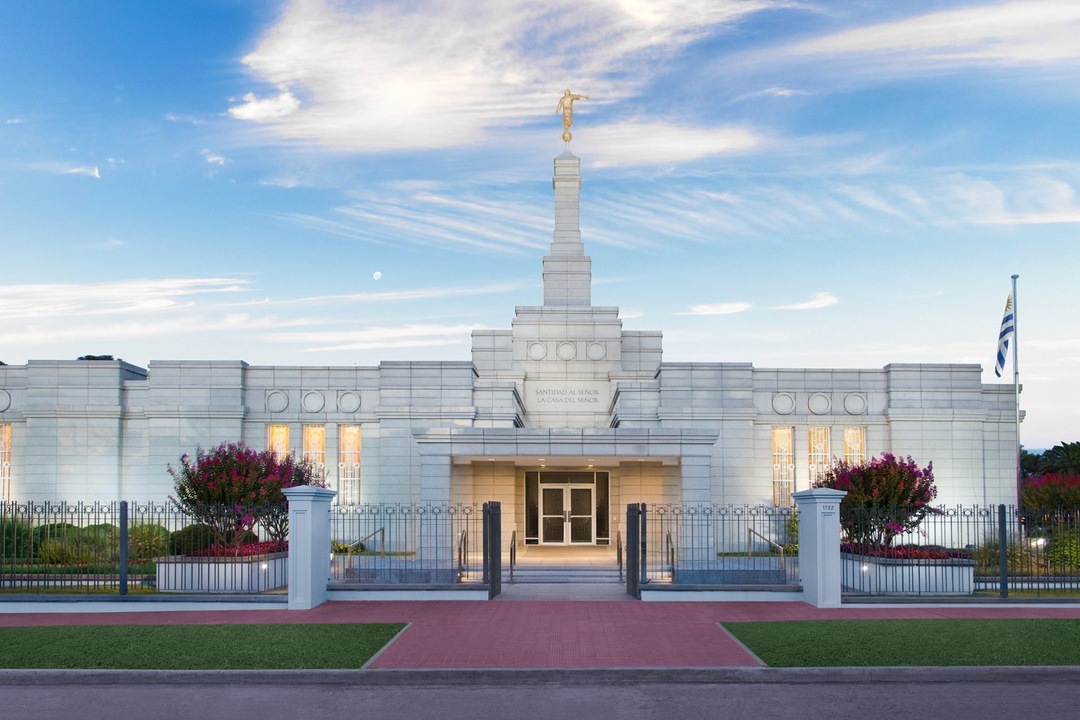 Occupying one end of a Church-owned city block in Montevideo's most exclusive neighborhood, Carrasco, the Montevideo Uruguay Temple adds to the wide range of architectural styles found along the city's southeast coast. Sharing the block with the temple are a meetinghouse, a patron housing facility, two mission homes, a regional service center, and a Distribution Services store. The lush temple grounds are filled with palm trees, shrubs, and brightly colored flowers.

The Montevideo Uruguay Temple was the first temple built in Uruguay.

The Montevideo Uruguay Temple site is on property acquired by the Church in the 1960s. It also houses two mission headquarters, a distribution center and Church offices.

"When the House of the Lord is completed, it will have an impact on all the nation. I have seen it in other nations, where members have eagerly attended the temple. The Spirit that comes affects not just the members, but all of the nation. This is a day of tremendous importance for Uruguay," said Elder Richard G. Scott of the Quorum of the Twelve who presided at the temple's groundbreaking ceremony.

As a former missionary in Uruguay, Elder Scott remembered his missionary experiences during his remarks. "Forty-eight years ago, I stepped down from a boat in Montevideo and began a stage in my life that I have treasured." He expressed appreciation to those in attendance for their faithful lives, and noted that "you represent a much larger number of members. Where I once served as president of the Montevideo District, now I see many worthy families, many missionaries, many stakes in the blossoming of the work. I am grateful to the Lord for what was done; it is as leaven for the entire country. I pray that the Lord will be with you in your preparations to enjoy the blessings of the temple."

Elder Carlos H. Amado of the Seventy and president of the South America South Area, who offered the site's prayer, said, "For the adults, this is the completion of a dream, but for the children it is a start of a new era. Those who are pioneers have seen much, but the most fantastic things the pioneers have seen will not be anything compared with that which the children here will see. They will see much more, and they will do much more than the pioneer members. The temple will be constructed for you to serve your many ancestors. Filled with faith, they came to this land and founded this nation with the desire to know God and worship Him in liberty. Many of these immigrants were guided by the Spirit of the Lord to come to this land; many of them do not have the gospel, but their names exist, and the work for their redemption is accelerating."1