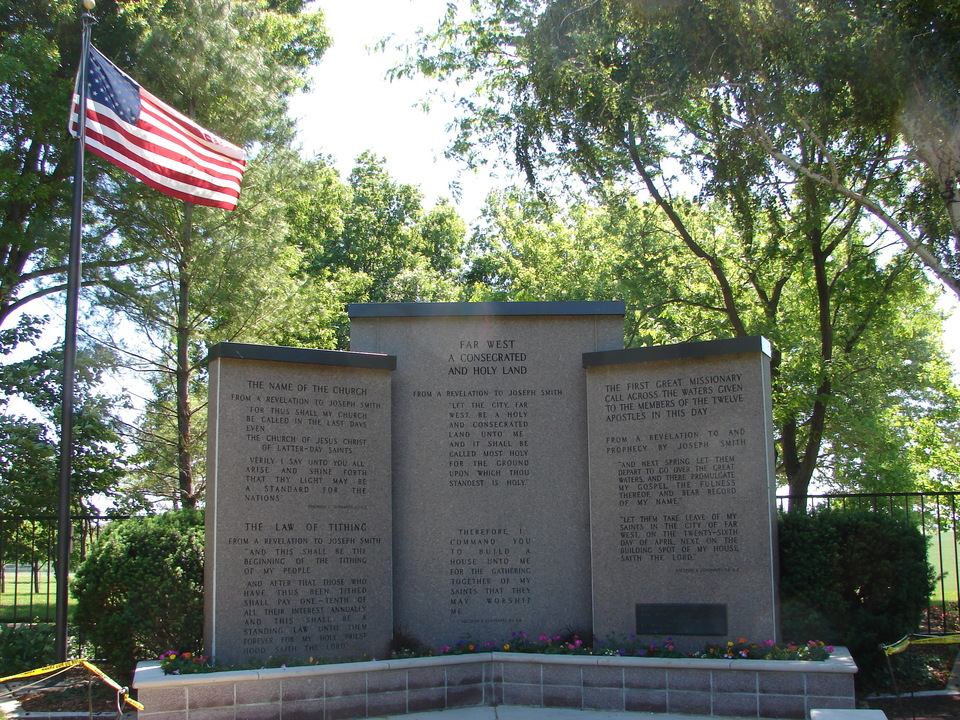 The Far West Temple site is located in Caldwell County, approximately 50 miles northeast of Kansas City. The property is maintained as a historic site by the Church, featuring attractive landscaping and a large monument that highlights Far West history. The aged cornerstones, laid for the temple in 1838, are beautifully preserved and displayed under protective glass. Visitors are welcome to come here and experience the brief but rich history of the Saints in Far West.

The Far West Temple was the second temple commenced but never constructed by the early Saints in Missouri.

The Far West Temple site is located in Caldwell County, which was created specifically as a settlement for the Saints, who had been driven out of Jackson County several years earlier in 1833. Far West was the county seat.

Far West was founded by the Saints in August 1836. In anticipation of building a temple in Far West, a large public square was laid off in the center of town resembling Joseph Smith's plan for the City of Zion, which was to be built in Independence.

Far West was headquarters for the Church from the time that the Prophet Joseph Smith arrived on March 14, 1838, until the expulsion of the Saints in the spring of 1839.

On April 26, 1838, Joseph Smith received a revelation from the Lord accepting Far West and commanding that a temple be built.

At the cornerstone laying for the Far West Temple, President Sidney Rigdon gave his famous Independence Day oration. The speech's passionate declarations fueled tension between the Saints and the citizens of Missouri, eventually culminating in the issuance of Governor Lilburn W. Boggs' extermination order on October 27, 1838.

Despite the great risk of danger, five apostles—accompanied by several others—returned to the Far West Temple site just after midnight on the morning of April 26, 1839, in fulfillment of prophecy. A large stone was rolled on the southeast cornerstone as recommencement of work on the foundation, and the apostles left to prepare for their overseas missions.

John Whitmer, one of the Eight Witnesses of the golden plates, was the only resident of Far West for many years after the Saints left. Among his land holdings was the Far West Temple site.

The Far West Temple site was reacquired by The Church of Jesus Christ of Latter-day Saints in 1909 under the direction of Joseph F. Smith.

In 1968, the Church beautified the Far West Temple site and erected a monument, making it an attractive historic site for visitors.

Following is a copy of the text inscribed on the beautiful three-paneled monument that stands at the Far West Temple site:

From a revelation to Joseph Smith:
For thus shall my church be called in the last days, even The Church of Jesus Christ of Latter-day Saints.
Verily I say unto you all: Arise and shine forth, that thy light may be a standard for the nations.
Doctrine and Covenants 115:4–5
The Law of Tithing

From a revelation to Joseph Smith:
And this shall be the beginning of the tithing of my people.
And after that, those who have thus been tithed shall pay one-tenth of all their interest annually; and this shall be a standing law unto them forever, for my holy priesthood, saith the Lord.
Doctrine and Covenants 119:3–4
From a revelation to Joseph Smith:
Let the city, Far West, be a holy and consecrated land unto me; and it shall be called most holy, for the ground upon which thou standest is holy.
Therefore, I command you to build a house unto me, for the gathering together of my saints, that they may worship me.
Doctrine and Covenants 115:7–8
The First Great Missionary Call Across the Waters Given to the Members of the Twelve Apostles in this Day

From a revelation to and prophecy by Joseph Smith:
And next spring let them depart to go over the great waters, and there promulgate my gospel, the fulness thereof, and bear record of my name.
Let them take leave of my saints in the city of Far West, on the twenty-sixth day of April next, on the building-spot of my house, saith the Lord.
Doctrine and Covenants 118:4–5